Let me begin my thoughts by reaffirming that demolishing Babri Masjid was wrong especially in a secular and democratic nation like India. Those who did it ought to be punished so that such acts are not repeated.

Yesterday the Indian supreme court gave the verdict on the centuries old Ayodhya dispute. The timeline for the dispute is as follows:

The final verdict  : Entire Disputed Site Goes to Hindus for Ram Mandir, Muslims to Get 5 Acres of Alternate Land
It is not a fair judgement since one cannot demolish a structure and build another based on hearesays alone. If so, entire India would need to be dug up to right whatever wrongs imagined or otherwise. But I think SC wanted to end this dispute in a peaceful manner and it is indeed a relief to note that the Muslim board has accepted the same though it could be out of compulsion. But it is clear that India needs peace. The animosity between the two communities is not new. Blame it on various invasions and specially partition. Invasion was unavoidable but partition was avoidable. The fate of millions were decided by few men who only wanted power?


Why did the 1947 partition of India unfold the way it did?
The context of World War II and the transfer of power were critical in shaping the violence. During the war, the British jailed much of the Congress Party in India. In the meantime, more violently inclined nationalist movements flourished, some bearing an imprint of fascism. Indians who fought in the war came home with violent experiences. They and their arms were recruited into new defense groups and paramilitary volunteer bodies attached to these violent movements, such as the RSS (Rashtriya Swayamsevak Sangh) and the Muslim League National Guard. Some Indian politicians in provincial governments began to use such groups for policing as they shifted from being the opposition to being the government.
Although the agreement required no relocation, about 15 million people moved or were forced to move, and between half a million to 2 million died in the ensuing violence.

If one thinks the above did not affect the remaining Indians then one is naive and shall never understand the Ayodhya issue too. I think the two communities continue to test each other. They hide their insecurity and fears and at times erupt in riots. Now with a nationalistic party at the helm it is not getting better. But what if the courts had given a different verdict? There is no guarantee that the government would have been able to quell the unrest. This am sure is one reason the Muslim community is accepting the verdict while hoping to move forward.

Sometimes one hears from the south of India, specially Kerala boasting about religious tolerance as opposed to the north of India. Maybe they should look at the following map to know who was affected the most during the partition if not by the various invasions. 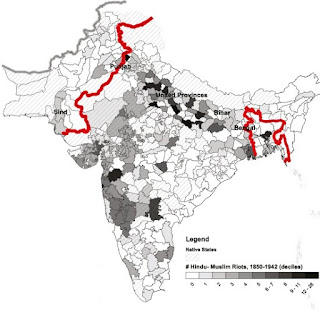 The extent and patterns of ethnic cleansing that led to the collapse of minority population shares in then western India was not anticipated. As late as November 1945, the Commander of the Indian Army, Field Marshal Claude Auchinleck, predicted that the “principal danger areas (for ethnic conflict) are likely to lie in the United Provinces, Bihar and Bengal”, these having also been the principal areas where religious rioting had taken place in the years leading up to Independence (Figure 2a, and Jha and Wilkinson 2012). Yet, the patterns of ethnic cleansing were very different (Figure 2b), and the areas that Auchinleck thought would be most susceptible to violence still enjoy sizeable minority populations to this day.


If Ayodhya is viewed against this backdrop let this verdict take the nation forward since there are many wounds still festering. India is indeed diverse and can never be like another democratic country. But the least one can do is understand the issues involved and stop escalating issues.

https://www.thenewsminute.com/article/ayodhya-verdict-sunni-wakf-board-not-file-review-petition-112032
https://voxdev.org/topic/institutions-political-economy/drawing-line-short-and-long-term-consequences-partitioning-india
Posted by Happy Kitten at 1:00 PM No comments:


If there is heaven on earth they say it is in Kashmir.

Maybe it is because of this that everyone is fighting for this piece of land. History tells us that Kashmir was once ruled by a king who sought help from newly independent India in order to avoid being invaded by Pakistan. While India tried to win the hearts of Kashmir by giving it a special status and by pouring more money that it has ever given to other states, Pakistan never gave up it’s pursuits. In fact, the first war between India and Pakistan was fought over Kashmir and the next one in 1965 ensured that Pakistan shall be forever under the grips of the military regime.


India had two options: either give up Kashmir or make Kashmir a part of India in every way. Over the years India tried in every way to make Kashmir a part of India but it has never worked. Pakistan never gave up and has always encouraged militancy among the Kashmir youth. Even today if you converse with a Kashmiri who fights for independence at the end his/her support is for Pakistan.

In the late 1980s, separatist discourse gained momentum in Kashmir and the military insurgency started spreading in the valley against what is perceived as an Indian occupation.

Now one may wonder why India should resist this. If Kashmir is ever separated from India it is for everyone to see that Pakistan shall occupy it within no time. Why not says Pakistan. But shall the world ever say that? Look at the both the nations and where they stand after 1947. The same set of people or DNA started building a nation. Where does Pakistan stand now? How good is it’s economy as compared to India?

As of 2019, GDP of India is around of 10 times greater than Pakistan. In nominal terms gap is wider (above 10 times) than ppp terms (below 10 times). India is 5th largest country of the world in nominal method and 3rd largest economy in ppp method. Nominal ranking of Pakistan is 43 and PPP ranking is 25. India's economically largest states Maharashtra has GDP ($334 billion) greater than Pakistan. Margin between these two countries was lowest in 1993 when Nominal GDP of India was 5.43x of Pakistan and highest was in 1973 (13.53x).

Now let us see how minorities have fared in both the countries over the years.

It is obvious that the Muslim population in India is not declining whereas in Pakistan the situation is getting worse day by day.

At the time of partition in 1947, almost 23% of Pakistan’s population was [composed] ofnon-Muslim citizens. Today, the proportion of non-Muslims has declined toapproximately 3%. The distinctions among Muslim denominations have also becomefar more accentuated over the years. Muslim groups such as the Shias whoaccount for approximately 20-25% of Pakistan’s Muslim population, Ahmadis whohave been declared non-Muslim by the writ of the state, and non-Muslimminorities such as Christians, Hindus and Sikhs have been the targets ofsuicide bomb attacks on their neighborhoods, had community members converted toIslam against their will, and had their houses of worship attacked and bombedeven while they were inhabited by worshipers.”


How did minorities fare in India over the years politically and economically?

A small list of positions minorities have/are occupying in India.


These are some of the most important posts of India.


And, the list is unending(Even if I don’t include Actors, Sportsmen, Businessmen and many other notable non-Hindus in India.)


Whereas in Pakistan the national assembly rejects a bill that allows non muslims to become the President or the PM.


Now let us return to the present status of Kashmir.

The Constitution of Jammu and Kashmir was rendered infructuous by The Constitution (Application to Jammu and Kashmir) Order, 2019 (C.O. 272) issued by the president of India on 5 August 2019. Indian President Ram Nath Kovind issued an order under the power of Article 370, overriding the prevailing 1954 Presidential Order and nullifying all the provisions of autonomy granted to the state. The opposition calls this unconstitutional and without any precedence. But it has precedence if you look at Indian history. The state of Goa came into existence thus but even now there are many Goans who want Goa to be an independent state.


The fight for freedom began in the 1940s as India inched closer to independence from British rule. But Goa remained a Portuguese colony until 1961, straining relations between India and Portugal as the former's support for the anti-colonial movement in Goa grew. In 1955, India even imposed an economic blockade on Goa.

In 1961,the Indian army invaded the state after the Portuguese fired at Indian fishingboats, killing one fisherman.

If you think Goans have given their pursuit for freedom then you are wrong.

Thepetitioners appeal to the current members of the United Nations GeneralAssembly (UNGA) to review the subject matter of this petition with a freshperspective as the conscience keepers of world peace. The UNSC resolutionS/5033 was passed in the 988th meeting on 18.Dec.61 with 7 members out of 11voting in favour of the motion calling for India to withdraw its forces fromGoa to its pre 17.Dec.61 position which was vetoed by USSR, a permanent member.

As for this letter’s claim of genocide, it is utter nonsense.

If Kashmir is looked at from the point of religious majority, let us look at another princely state in India which joined India much later. While Cochin joined in1949, Travancore joined only in 1956.

Even now my mother who experienced the princely rule states that those times were much better as compared to now. Now I may disagree as much as I can. J

Kashmir too will have its problems in the years to come but am glad that the current step was taken. This will give its inhabitants a chance to experience India just like any other Indian. Without the intervention of Pakistan I believe Kashmir shall prosper and shall truly become an Indian paradise.

If not, let India give up Kashmir to it's fate.

The restrictions imposed on tourists intending to visit the Kashmir Valley will be lifted today following a direction from Jammu and Kashmir Governor Satya Pal Malik on Monday. On August 2, the state administration had issued a security advisory asking tourists, especially pilgrims taking part in the annual Amarnath yatra, to leave the Kashmir Valley as soon as possible. Back then, the government had said this advisory has been issued due to a "terror threat" in the Kashmir Valley.

An interesting conversation if you have time to read.