Another kitten is missing and she was such a cute one. 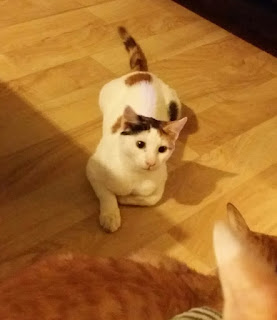 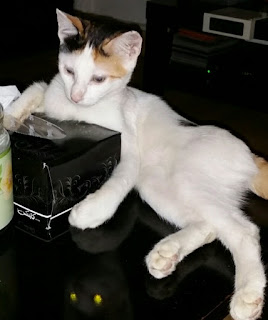 Like earlier, the mother cat used our flat to give birth and as soon as they were old enough she took them out with her. One disappeared (killed?) during our vacation while Fluffy somehow survived and she became very comfortable around us. This must have been one reason why it was easy to get rid of her too :( .
The reason for the hatred is understandable since she sometimes dirtied the apartment premises though she would have learned to go outside like the rest after a while. Did the best to clean the mess myself but someone decided to end it all. At times like that I just cannot understand humans at all. How one could hurt such an adorable animal. Is it out of fear or plain hatred? Is it because one lacks compassion?


While growing up during times when shops with cold storage facilities were a rarity, Father used to bring home hens, ducks etc. hoping to see them on the table as a tasty dish, but more often it ended up being adopted and Mother too joined the children’s team.  This must have happened in many households. The longer it stayed around, the more chance for its survival and Father tried his best to ensure this did not happen. It is not as though Father lacked compassion but he was only being himself. As for us children, nothing stopped us from eating what was cooked. Did we not learn to be compassionate? Tough questions to answer.
Early humans adopted many animals and many were killed for sustenance. He reared some animals only for its meat and must have developed some sort of relationship with them until it was killed. It must be his survival instinct kicking over his compassionate side? China has no compassion for dogs since they love the meat. Cats too face the same situation and not just in China.


In Switzerland the private consumption and slaughter of dog and cat meat is permitted though its commercial trade is prohibited by law. A 1993 petition to ban consumption failed with the government declaring the matter a "personal ethical choice." In June 2008, three students at the Danish School of Media and Journalism published pictures of a cat being slaughtered in Citat, a magazine for journalism students. Their goal was to create a debate about animal welfare. The cat was shot by its owner, a farmer, and it would have been put down in any case. The farmer slaughtered the cat as well, all within the limits of Danish law. This led to criticism from Danish animal welfare group Dyrenes Beskyttelse.[11][12] and death threats received by the students.[13]

In February 2010, on a television cooking show, the Italian food writer Beppe Bigazzi mentioned that during the famine in World War II cat stew was a "succulent" and well known dish in his home area of Valdarno, Tuscany. Later he claimed he had been joking, but added that cats used to be eaten in the area during famine periods, historically; he was widely criticised in the media for his comments and ultimately dropped from the television network.[14]

In 18th-century Britain, there are a few records of cats eaten as a form of entertainment.[17]


India took a different approach towards another animal which gave much to him. Cows have always been an integral part of the Indian household and it being a very demure animal, easily invoked the compassion in us. But compassion seemed not enough to keep it from being killed and hence it was turned into God. Religion always managed to have the last say and people listened better.


Not killing animals is a very noble idea indeed. I would love to live in a world where such noble ideas are possible. But it is wishful thinking.


But if all those noble ideas stops you from being compassionate to your neighbor  or from someone from your own species, then what nobility is one talking about?


Enough rambling for today but it is a video of a cat being beaten to death and the recent beef issue that brought me to this blog.
The beef issue is more politics than anything else but religion can make people sit up and pay more attention than it deserves. India sells more beef and it consumes much too. I do not think it is easy to change this fact.
Let me end this with an excerpt from another blog, copied without permission.

As I boarded the Rajdhani express from New Delhi for Parasnath for my intended visit to Jharkhand the co-passenger in the side seat was a young boy from IIT Delhi who happened to belong to Jain community and was visiting to Parasnath for religious rituals that his parents were performing. During the conversation he said that he is a vegetarian but definitely respect people’s right to eat non-veg food. He opined that the world was changing and that a business community cannot be confined to narrow partisan and outdated thoughts that look down upon others who have different take on the issue. World is too diverse and as a global citizen you will have to respect people’s personal choices to food and drink he said during the conversation. The boy laughed when I said don’t he think that Jains are hypocrite as the biggest meat-beef exporters in India are Jains and Marwadis. His position was that we are in business and need to whatever is good but at the same point of time narrow attitude may be damaging for future of their business. It was a happier togetherness in the train for nearly 12 hours where I found how the Jain youngsters are changing and feel that their community needs to move beyond if it has to remain in business