A road trip to cherish-3

Was supposed to finish this narration last week but something literally stopped my breath! What else but demonetisation? The initial reaction was shock and then the feeling that finally something is being done about it. Then came the nagging doubts, knowing well how the Indian administration works. How in the world are they going to manage this exercise! As for it's long term effect, not even Harward experts seem to have any clue, so why break my head? And knowing our politicians, if this only to fool the voters, then it is going to burn them for a very long, long time. So let me leave it and get on with my trip.

We decided to leave Panaji early in the morning so as to reach Kerala in time. The roads were free at that time except for the cows! Think Goans are letting their cows use the roads during the night. A dangerous action for the cows as well as the vehicles. We decided to go slow until daylight broke completely. It brought back memories of Kumily- Kottayam road of yesteryears, when cattle for slaughter were made to walk all the way from Kambam, Theni etc, to Kerala. They could be seen in all sizes along the roads.
﻿
Did click a group of them but cannot find it now.

Thus we reached the Goa-Karnataka border and we still had the Feni and Wines to be taken care of. 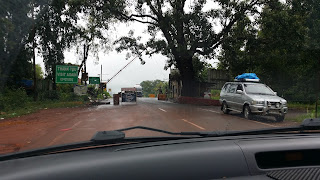 We had packed them into our bags and the police guy wanted to see our bags. For sure they found it and Hubby was asked to see the Inspector or whoever was heading the police station. He went along and was asked to pay IRS 2,000! The whole stuff did not cost that much but since we had no clue of the rules or regulations and since we did not want to waste time, had to settle for 1000. Yes.. it was a bribe. Meanwhile, Son was asked to show the papers by another guy who demanded IRS 100. Upon telling him that all the papers were fine he said this is the custom. After all that trouble, not many takers were there for the Feni. I think Kerala toddy is much better.

The drive through Karnataka was smooth except for a few stretch where the roads are being widened. It is only upon driving through Karnataka that made me realize that it is blessed with so many rivers. The beaches along the road beckoned us to stop but we had to reach Udipi in time to visit a friend. 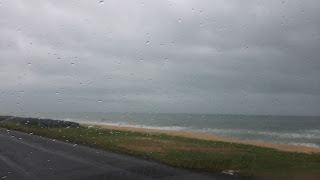 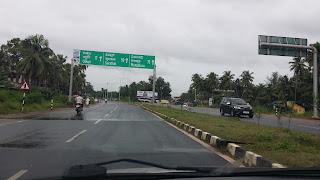 We halted at Udipi and was treated to lunch by our friend. They almost made us break the journey by enticing us with so many places that Udipi has. The Krishna temple that I once mentioned on this blog is one of them and so is Manipal where so many from Kerala come to study. We promised to visit another day and continued our journey. We thought of halting at Kozhikode but realized it will be to late to find a good hotel. The drivers were fine with driving non stop (it would be almost 25 hours of driving) and since they were taking turns to sleep, it looked okay.

The GPS did take us through a vey bad stretch of road in Kasargod which delayed our journey even more. It was near Kasargod town, when we stopped for refreshments that a strange incident happened. There was this ice cream parlor which also had a board saying Tea/Coffee available. We stumbled out of the car, much tired and in want of something to drink and maybe eat too. Upon asking the father and son duo (they looked so) who were running the shop if they served coffee, they said there was no coffee but can serve tea. We waited for quite some time and found no tea coming. Later, the fellow came and said that there was no gas to boil the tea. Just when we were about to enter the car, we saw the fellow happily boiling something on the fire! Why did they refuse to serve us? I still do not have an answer to this question and at the next stop, both me and daughter stayed in the car while coffee was brought to us. Did not want to test anymore and go without refreshments but this was the first time we encountered such a behaviour in Kerala. Hence it was with much dread that we halted at Kannur for dinner. It was getting late too. But to our utter surprise and delight, we found the hotel(Bamboo Fresh) crowded even at 10:30 pm. A very jolly crowd too. Maybe it was the Onam spirit and celebration. 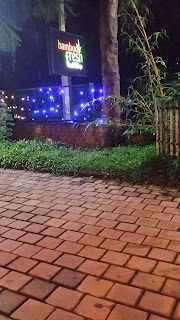 The rest of the journey was mostly nodding off and waking in between to see if the drivers were fine.  Reached home the next morning and used the day to rest. Thus ended our road trip and maybe next time we shall plan a longer one.
Posted by Happy Kitten at 1:17 PM No comments: