After the CWG fiasco here comes another disheartening report which should wake us up.

The Global Gender Gap report by the World Economic Forum. 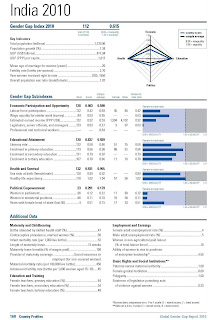 The Index benchmarks national gender gaps on economic, political, education- and healthbased criteria, and provides country rankings that allow for effective comparisons across regions and income groups, and over time. The rankings are designed to create greater awareness among a global audience of the challenges posed by gender gaps and the opportunities created by reducing them. The methodology and quantitative analysis behind the rankings are intended to serve as a basis for designing effective measures for reducing gender gaps.

As always, curiosity made me look into the report, to try and understand what I can.

Also, like many I wondered why India went below Philippines (with rank 9 and highest amongst the Asia and Pacific countries) and also Kuwait (women were given voting rights only recently) and UAE, specially when India has a woman in three of the most important positions, namely Sushma Swaraj of the Bharatiya Janata Party (BJP) and currently the Leader of the Opposition, Sonia Gandhi, President of the Indian National Congress and Prathiba Patil the Indian President. Sonia Gandhi was also ranked 13th in the Forbes most powerful women in year 2009, although they have not ranked her this year. But the report has taken into account this factor and hence India ranks 23rd in the political empowerment. Yet, this seems to have made no impact on other crucial areas namely, Literacy Rate, Infant Mortality, Maternal Mortality and even Wage Equality for Similar Work.

Now if you are wondering why this should bother us:

For instance, the United Nations estimates that, only in the Asian region, about $47 billion of yearly output are lost every year from a lack of female participation in labour markets, as reported in United Nations (2007).

Gender discrimination has widespread ramifications and clear economic and social costs. The Asia-Pacific region has made good progress in reducing gender discrimination in recent years, but appalling disparities remain. The region is losing $42-$47 billion per year because of restrictions on women’s access to employment opportunities – and another $16-$30 billion per year because of gender gaps in education. Those are just the economic costs – added to them are social and personal costs.

In some countries, one in every 10 girls dies before reaching the age of one, and one in every 50 women dies during pregnancy and delivery.

India and also Philippines falls under the Lower Middle Income Group of countries and this may be one reason why India (with a larger population) lag behind countries like Kuwait and UAE who are grouped under the High Income.  Sri Lanka has retained it's position and is doing well despite the turmoil it went through. And these countries are much ahead when it comes to educating their females. And education seems to be the crucial factor. In terms of literacy, India has only 51 females (out of 75 men) while more women than men gets the basic education in Philipines (95 female and 93 men). Even China's literacy rate is excellent 91-97. Sadly Pakistan is ranked the lowest in the Asia and Pacific region and those dollars which came in has not done it any good and for that matter it may go down further if the Taliban get's it's way.

There is also one more interesting fact that I noted; if one assumes that there are smart men and women who are equally good at their jobs, then when lesser women are getting educated, some jobs are being filled up by the not so smart men :)  We are aware of some of those women who are doing very good.  Indira Nooyi  who is ranked 6th  in the latest report (Forbes most powerful women)  maybe ignored since her field is not India ( situation is not favorable ?) but yet there is still Chanda Kocchar  who runs ICICI, India’s second largest bank and she is ranked #92. I am sure she deserves a better rank since this bank seems to be standing up quite well when others elsewhere keep tumbling down occasionally. (103 failures in the period Jan-Jul 2010). Now I am not sure if women are better or worse  in jobs, although my blogger friend seems to have an opinion on them. I think it is because they need time to get used to the idea. But there are international companies who have made it a policy to hire 50% of women since it works better for them.  PWC is one example.


"We still need a true gender equality revolution, not only to mobilise a major pool of talent both in terms of volume and quality, but also to create a more compassionate value system within all our institutions."

First, gender inequality in education and access to resources may prevent a reduction of child mortality, of fertility, and an expansion of education of the next generation.

Greater education increases her health knowledge which improves her ability to promote the health of her children (World Bank, 1993), and greater bargaining power increases her say over household resources which often leads to greater allocations to child health and nutrition, compared to their husbands. For example, Thomas (1990) found that the impact of unearned income on child survival was 20 times greater if the income was brought in by the mother than if it was brought in by the father.

And, gender gap can also affect the Total Fertility Rate.


There is a high correlation between TFR and per capita income, with higher TFR leading to lower incomes figure 3.10). The TFR is also a good indicator of women’s control over their reproductive rights and  health, of progress in gender relations, and of education, particularly that of women.

Now, to reduce population some may want to go the Sanjay Gandhi way (though it may have appealed to at least a few if he and his brother had set out an example themselves!). But if educating the female population can indeed bring down the overall population and much more, then it is time India spend more money on this than affairs like CWG's. CWG did give us Indians a high for a few days but I do not think it has done much for the long term.

Of roads, cars and faith..

This time I travelled up and down the MC road (Main Central Road) or the alternate road to the NH 47. The road is too good after it was repaired and at times it looked like an airport runway! I also discovered that the Ambassador car which once proudly owned the Indian roads have now become a rarity. I couldn't spot one even among the taxi stands. This old and trusted friend just couldn’t keep up with the changing times and I think have lost the race to the racier, sleeker ones.

Having seen almost all models of foreign cars here in Kuwait, it was easy to spot the same in Kerala too. And I think this time I spotted many of them. Yes, luxurious cars have always been a weakness to many. For the rich it is another status symbol and one which can keep them apart from the ordinary folks. I remember how my very earthly cousin brother used to tell us that his dream is to drive a BMW. I am sure he is driving one now since he holds a very good job in the UK. He deserves it since he did burn much midnight oil for his earthly degrees.


Anyway this is not really about cars or roads. This time we saw a beautiful Mercedes s-class car on the road and while we were admiring the same, we tried to have a glimpse of the proud owner.. it was a Christian priest. And if it was not enough, we saw yet another costly foreign car being driven by the same clan. 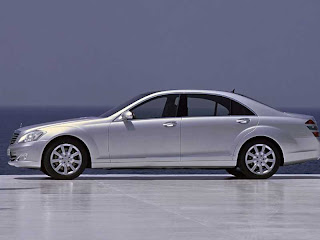 I am not saying that there is a rule that says Priests are not allowed to own or drive expensive cars but as a Christian, I am offended and ashamed.

From the pulpits they preach. They tell us mortals to give (the 75 + lakhs could have made a lot difference to the needy), not to indulge (an ordinary car can also take them to their destination), not to covet, not to be greedy , not to incite etc etc….

Now, I am not sure why I myself am indulging in a very non Christian act, i.e grumble/judge when I am sure no priest is ever going to read me. But since even they have become very net savvy one can never be sure. Hence there is just one request from this confused mortal; next time you wish to indulge in earthly pleasures, please DUMP that priestly garb for something more appropriate and the next time you stand on the pulpit, please try to refrain from PREACHING what you yourself cannot practice.

And there is another rumbling on the horizon.

Some of us are yet to recover from those scenes on TV when 2 factions of the Church had fist fights amongst a falling corpse from a funeral march. Those days, most of us like Peter  denied to our co-workers and friends that we belonged to this Church. It was too shameful.

Trouble seems to have erupted again and at Parumala where one faction already has a Church while the other is aspiring to have a new one. 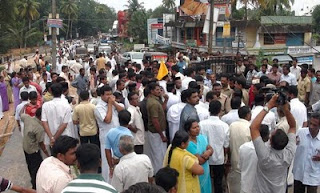 Can one own a saint?

If so, Parumala Thirumeni  seems to be wholly owned by the Orthodox faction while the Jacobite faction thinks otherwise, since when Parumala Thirumeni was alive the Church was one. Now I am not sure who should take credit for the solace and blessings given to those who sought this Saint; is it the Saint himself or the Church? And since the Church encourages the weak and heavy laden to seek blessings from this Saint should they not be happy to know that they have one more location to receive these blessings?

Or shall I,  like many others with more of an earthly sense think that there is some other underlying reason for all this saintly love, be it from any faction? $$$

Anyway, let me pray that those who are supposed to be leading these Churches would for once show some heavenly sense and stop inciting the weak and confused believers who may be excused for exhibiting an earthly sense.