What is wrong with these people? Why can't they talk about something else?

The above lines may go through the minds of anyone else, but not a single Keralite, even if he now resides in the North Pole.

Frankly speaking, I have never seen Kerala united in such a manner!

The unity is such that it has even scared the wits out of the various political parties in the state. What relevance will they have now? It might have been quite a revelation too, to know that the Keralites can unite, without prodding, prompting, feeding (Biriyani & Toddy) and to hold placards either to march or go hungry.

In Kerala, one will find a bunch of supporters for any Tom, Dick or Harry… be it a dictator, a lousy world leader, a pop star, etc. etc. There will always be a few Keralites/Mallus ready to disagree on any damn subject on this earth. And mind you, they do come up with their own reasons for the same; you can either take it or leave it. [If this author (of the blog!) too comes up in your mind, you are right on spot :) ]

But never ever in the history of Kerala, has one seen such a strong unity.

Even if the mallu stopped sowing, he lost no sleep while spending more money to tuck into his favourite rice and veggies. Even if he stopped keeping a hen’s coop in his own house, he had no problem getting his chicken at a higher price from elsewhere. All he wanted was some peace (and a few more hartals too), while he let his otherwise lousy patience be tested to the utmost, when waiting for his turn of his favourite brand.

What made the complacent Malayalee wake up from his/her slumber and unite with one voice?


Well, the matter of fact is that Keralites were literally jolted. Although the Richter scale thankfully did not move up far enough to throw him out of his comfortable bed, it was enough to make him lose his sleep. The latest one was at 13 kms East of Erattupetta (Kottayam) - richter scale 3.2 on 25th Nov 11, while the earlier one was at Kallar near Idukki (3.1) on 18th Nov 11. 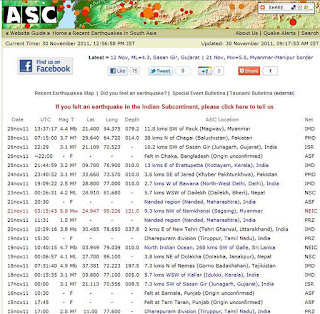 If a statement like the following in “Incredible Kerala” website was earlier read with pride, it is now read with nothing but pure horror in his mind.

“The Mullaperiyar Dam built across the river Periyar with Surki mix before 121 years, still exist as a wonder to the tourists.”

Surkhi is a mix of lime, sand, clay(or brick powder) and jaggery (sarkara) used as cement for joining building blocks.


And there is not just one dam, but many that has the destructive potential to change the entire history of Kerala and even Tamilnadu.

And now, when a few from the state of Tamil Nadu says that this dam should not be built or the water level not reduced, then it is not the same Malayalee who is now turning his head to respond.

He may have said nothing when they asked for water earlier; for he very well knew that it was for the vegetable and rice that may appear in own table. But now you are asking him to give up his very existence! Do you think he shall ?

P.S. Let me also add that there are many from the state of Tamil Nadu too, who have joined the Keralites in support. 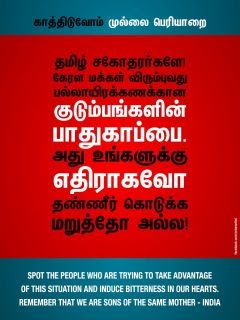 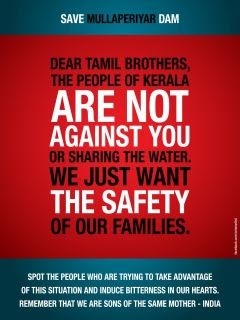 http://www.youtube.com/watch?v=gTkk7LGXypg  A documentary by C-Dit on the issue of Mullaperiyar Dam. A "must see" for keralites and tamilians.

There is also a news that Tamil Nadu has allocated in their budget almost 100 crores and this is being used over the years to shut the mouths of the Kerala politicians...http://marunadanmalayalee.com/mminnerpage.aspx?newsid=63454 ..
Posted by Happy Kitten at 11:03 AM 4 comments:

Yesterday, I read with much sadness that one of my favourite blogger has left this world.

I have never met her, although she is known to one of my relations who teaches in the same college that she worked.

Always wanted to friend her in Facebook.. but was not sure if she would accept.

She wrote brilliantly; her mastery of the English language was there to see in every blog entry. A courageous blogger who could take the bull by the horn. Always looked forward to her jottings; sometimes to disagree.

She also wrote separately about her fight with cancer. I salute her indomitable spirit.

Rest in peace dear soul. You shall be missed terribly by many of us.

While I grapple with the fact that more than a year has passed since I wrote the post on Gender Gap, (yes the days are flying too fast), let me also say that there is nothing much to say about the current one since India has only moved a rank down. 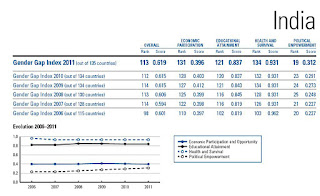 The complete list can be seen at WEF Website, but you can have an idea where India stands if you look at those countries just above and below India.


If you have some time, then do take a look at the interesting discussion at redif (comment section) on the same subject.

And today, we also read that MM Sing and Sonia ranks among the 20 most powerful – courtesy Forbes. Sonia is also one among top 10 richest politicians in the world.

A powerful woman in India but no power to the Indian women!

But then among the “powerful”, we see the following too…. :)

The aliens that live amongst us..


They dress, walk, eat, sleep and do everything just like the humans; yet they are not human.

And they cannot be Gods (though they believe and act so), for they do not live forever; they die like a common man.

But they have a unique name – politicians.

They may live in India, but no law can touch them. And in case it does, they get out in a jiffy. If the luxury in the jails is not good enough, they quickly seek hospitals. The more alien they are, the rarer would be their ailment; which makes it impossible to lead them out of the hospitals, unless they are told that they are freed from jail. They are quick to send petition in case their alien status is not recognized by the mere mortals.

Kerala row over release of Pillai

The moment the UDF government came to power, Pillai was allowed parole for almost 45 days citing the illness of his wife. And once the parole was over, he was forced to go back to jail. Thereafter he was admitted to a private hospital after he fell ill following a different kind of disease. Though CPM leaders opposed his parole and his admission into the private hospital, the UDF government ignored the protests. Now the UDF Government has taken a decision to release him.

The duo on Monday filed a petition in the CBI court seeking a special class prisoner status for them in the jail in accordance with Rule 730 of the AP Prisons Rules 1979.

New Delhi: Two days after being discharged from hospital, Rajya Sabha MP Amar Singh, an accused in the 2008 cash-for-vote scam case, has moved a Delhi court seeking its permission to go abroad for treatment of his kidney ailment.


In an application to Special Judge Sangita Dhingra Sehgal, Singh said he had been undergoing treatment at Singapore's Mount Elizabeth Hospital following his kidney transplant and he needed to go there for regular check-up.


They may park millions abroad , but when caught, their names shall not be uttered. Even the media is scared to blurt them out.


Summons have also been issued to three Members of Parliament (MPs) from Haryana, Uttar Pradesh and Kerala to appear for questioning at the Delhi office of I-T department's recently-set up Directorate of Criminal Investigation (DCI). The MPs would be asked to explain the source of funds in the Geneva accounts.

Yesterday, when an alien in the Finance Ministry was asked for the names of these great Members of Parliament; the lowly humans were informed that they do not have such privilege and hence to shut up.

Pranab Rules Out Disclosing Names Of MPs Having Foreign Funds


The persons who are being summoned for offshore funds by the Income Tax department include three MPs, one each from UP, Kerala and Haryana, and an industrialist based in Mumbai.

The industrialist during questioning had admitted to having family accounts in HSBC Geneva with deposits totalling more than Rs 800 crore. One of the three MPs has Rs 200 crore in overseas accounts, the Times of India report said.


What shall one do with these aliens?
Posted by Happy Kitten at 10:41 AM 4 comments: