It was a casual remark: "One need to have a political and religious identity": set me thinking. Really? What purpose does it serve?

Let me look at both. Having a political identity means that you are a die-hard fan of a particular party. And what does a political party do? Ideally in a democracy it should help in nation building. The same goes for religion too. Ideally, it should build the spiritual side of a person. But what happens when one succumbs to a political party/ideology or religion? One fails to see the mistakes it commits. After all, both religion and political parties are made on earth by mortals and is bound to fail. When you surrender your identity to a religion or a political party you fail to speak out for it's wrongs.

One good example would be Hitler who headed the Nazi party and was able to persuade many to kill in the name of his ideology. It looked very easy once he attained power over the minds of his followers. He became too powerful to rein in even if anyone had second thoughts.

As for religion, I don't have to say anything! The examples are numerous.

In my state of Kerala, the main political parties are the Congress led UDF and the Communist parties under LDF. They take turns governing almost every 5 years and this happens not because of the die-hard fans of these parties but only because of those who rose above each party! The die-hard fans must surely have voted for their favourite party, but it is the votes of the rest which turned the tide.

A party ideology or love can prove to be disgusting at times. The recent one would be the brutal killing of TP Chandrashekaran. Am not ready to blame it on the Communist party with whom he was at loggerheads but one saw the hatred of the party even after he was dead! What makes one behave so?

Or let us look at the love of the Congress or the BJP fans. It is the same kind of blindness that is exhibited by many.

Let me conclude by saying that to build our nation each citizen should rise above political parties and be ready to point out the mistakes of those who ruin the nation.

A political party should be made to build the nation and not the politicians.
Posted by Happy Kitten at 11:27 AM 14 comments:

History was boring only when one had to memorize events and dates to reproduce it during an exam. But later I have always loved looking up history. A few blogs have made it even more pleasurable. Have always loved imagining the situation as it was eons ago. Since human emotions have remained pretty same, it is easy to imagine!

Some say it is not good to dwell in the past glory since we forget to move forward. But one cannot and should not ignore history since it can repeat if forgotten. And if there is one history that I want to be repeated, it would be the following:

India was by far the biggest economy at the dawn of AD! followed closely by China..

Most of us are recipients of emails which stated this fact in many other ways. Some were taken seriously while others were ignored. A few even called these Indians "nationalists"! Not sure why the love for your country is a bad emotion! Love for your own country can be compared to the love you have for your parents and your home. It does not mean that you hate another set of parents or home. It is just that it is from your home that your identity first shapes up and hence you shall always have a special regard for it.

Anyway coming back to the topic of ancient India, if you look at the map you can see that India is in a very dismal position at the moment. China had the same constraints but look how it is bouncing back?

While China seems to be slowly regaining its lost glory, India seems to have a lot of catching up to do. Even militarily, China is way beyond India. 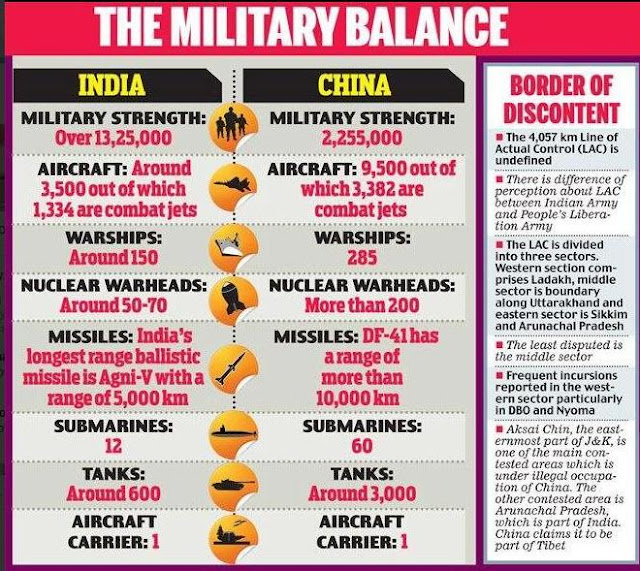 The main reason being the rampant corruption that is eating into the resources of free India. I am sure most of us don't want a Chinese style of administration but I think the Indian freedom has lost all it's meaning. Right now the only free Indians, enjoying the fruits of India are the politicians and and those who pamper them.

I did not write this not to offer solutions but just wanted to remind myself that India had a glorious history but due to the smugness, complacency, and carefree attitude of us Indians the past glory continues to evade us.

Realize now that I have more or less abandoned this blog. Sigh.. Shall blame it on twitter where I continue to rant and most of it are addressed immediately. Which means, the steam of the ranting gets over in twitter itself. Twitter also reduced my words to 140 and muddled my grammar and spellings too! Right now I am writing just for the sake of it and with no topic on my mind. I could write about the current coalgate scam where our CBI has openly/legally confessed that they are not an independent team. But since this news is not new, it does not surprise me and I find no way out for this nation. UPA refuses to see it's mistake and there in none to make it pay for it's mistake, unless our esteemed Supreme Court finds a way. Will it save this nation?

Meanwhile our daughter has reached the 12th standard and son 11th. Time has flown too quickly and soon both of them would have to leave Kuwait to pursue higher studies. Until now parenting was easy since they were near, now I wonder how it would be when they are far away. Will they be responsible enough? Will the new freedom make them stray? Will they find right friends? Will the college have ragging? These are some of the thoughts that go through my mind. Sometimes I feel I should go with them but that would mean that I would have to leave Hubby behind. But then things have come this far and I guess it would do so in future too. I still remember how a friend once said the same when I was new to Kuwait and yet to have children. When I wondered how difficult it would be to bring up children with no support she casually remarked that one would take it in stride and it will come naturally. And I did. I had none to support me during my delivery or when I reached home. But I think I did a fair job with my children :)

The children changes fast! It needed a lot of chiding to make my son comb his hair or select a dress but now he takes more time than his sister to dress up. Even then he has to take opinion from his sister on everything. I see him updating his profile on FB and then waiting with much tension to see the number of comments and likes. This is the age of social media! As for daughter, she has less words for us but too much for her friends. Her phone calls are never ending and I end up threatening to call up parents. Earlier she used to hang onto her father's arms when out for shopping but now unless he reminds her, she does not. Hubby feels abandoned and keeps reminding that the children no longer want us. Guess one need to get used to the fact that they are ready to fly the nest and we may no longer have much hold over them. I left home after my 10th and used to come home only for study leave or during vacation.

Right now I have this great urge to move to Kerala knowing well that that I may regret the decision :). Hubby won't even let me finish uttering my desire. Living in India will not be easy especially after a life out here. I am not talking about the comforts which is available in India too for a price. But somehow life out here is fairly easier and you fall into a false sense of security, whereas in India one is rudely awakened each time we try to settle down. As for the NRI's how much ever we are on our guard, someone or the other will always be there to think ahead of us. Anyway, let things move on as it is now. Maybe if my MIL asks for my assistance I shall relocate to India. Right now she is comfortable with her lonely life. The greatest surprise is that she has grown to love our dog Jim. She used to hate dogs, mostly due to her fear and it was FIL who still kept dogs out of his love. Though she used to feed the dog she was always threatening to drive it away. But Jim has captured even her heart. Since Jim being a lab had a habit of jumping upon you, she used to keep away from him. But recently we had to terminate the services of our maid since she tried to swindle money and another is yet to join. This meant that Jim was confined to his cage. Poor guy! Until the other day when MIL took courage to let it out and lured it away by food. Surprisingly Jim seems very caring towards MIL. I think he understands that MIL is old and should be treated thus. She is 82 years. Yesterday she was sitting out in the front, and Jim brought the chappals that she uses outside from behind the house. Maybe Jim wanted her to move around with him! Here is a picture of Jim as a pup. 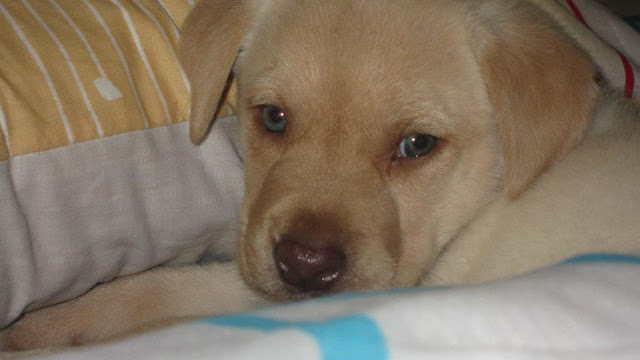 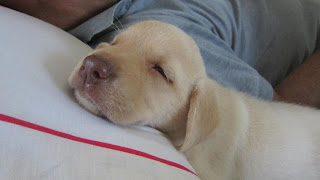 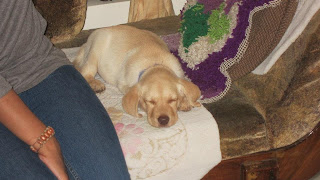 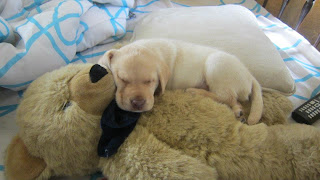 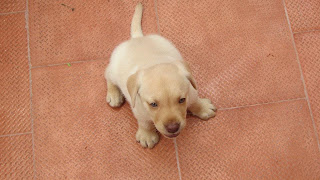 All of us miss him much and we are waiting for July to come so that we can see him. He has grown big and will soon celebrate his first birthday. We bought him home as a puppy and he accompanied us everywhere. He slept with our son until we had to leave him behind. Only Hubby was lucky to see him again and he brought back enough photos and videos to satisfy us. Only dogs can love you unconditionally!

Think I have rambled enough for today :) Hope to return with more serious topic soon.
Posted by Happy Kitten at 12:19 PM 8 comments: