There is no change..

We are laying  interlock tiles around the house and since the material is being delivered from the factory directly it their own workers who are unloading the same. They include, Bengali's, Tamilians and there is one from Delhi too. He is in Kerala since 4 years and also got married to a Malayali girl. Anyway the owner told us in advance that as long as the union workers dont interfere his workers will unload free of cost. But yesterday the workers somehow came to know about a truck load and came in a bunch and demanded that they be hired for the work. No reasoning would suffice them and in the end we had to allow them to unload. This took much more time than normal.

I thought this menace was under control in Kerala but it looks as though it isn't. We did not want to antagonise them and invite trouble.

We hope to travel to Coorg and B'lore after a couple of days.

Yesterday for the first time I had a new kind of Rasam; made out of the illimban puli. I dont know the English equivalent for the same. But the rasam was very tasty. 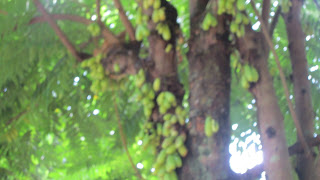 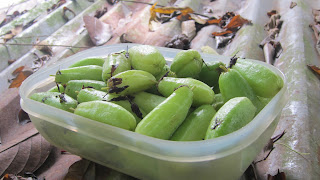 Let me jot down the recipe before I forget it.

Mix the above in 3 glasses of water along with the chopped Puli. Heat it until it just begins to boil. Remove from fire and splutter mustard seeds, brown small onions and curry leaves in Coconut oil. 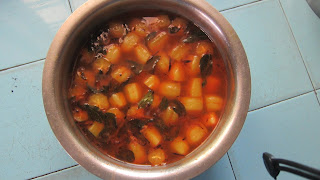 Tasty rasam is ready for rice.
Posted by Happy Kitten at 7:29 AM 4 comments:

The much awaited monsoon is here and it is getting cooler as the days go by. When we landed the climate felt no different from kuwait. But now the nights are cooler.

We have a new member in our family. Jim- he is only 2 months old but very adorable. He is a labrador. Here is a cute picture of him. Hope none puts eyes on him :).  He is already on antibiotics due to change in food. He now travels with us wherever we go and behaves very well when out in the public. 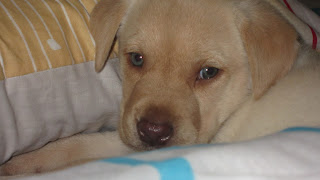 This time I have help around the house. She is very efficient and her appearance has further enhanced my vacation. She has 2 children, a girl and boy but her husband left her and hence she is a single mother. They were in Bombay and during her second delivery he left with the lady who had come to cook for him, while she was in Kerala. She now stays with her parents who are getting old. Her children are now studying in the government school and she says the school is good. Yesterday she went for the PTA and met some good teachers. The uniform and school bag is provided free of cost and they also have lunch; rice gruel with a lentil dish. When the student reaches 7th standard, they will be provided with a bicycle too. Felt very happy hearing this. This arrangement eases much burden off her and she is much hopeful for her two children. The school recently shifted to English medium. I do not know if every other school is similar or if it is because of the teachers who are teaching in this school. And I also wonder how the situation is in the rest of the country.
Posted by Happy Kitten at 9:37 AM 5 comments:

The monsoon is not in full swing yet and hence the kokum fruits have some time under the sun. 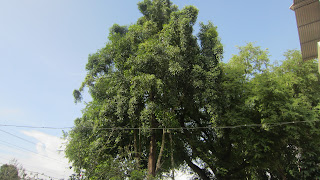 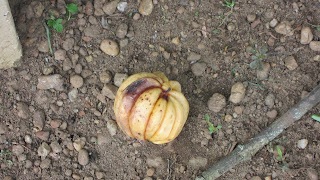 The final seasoning or smoking 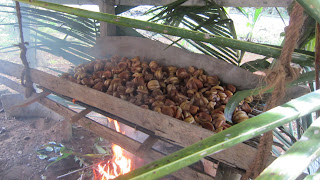 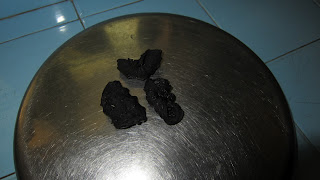 The kokum is the main ingredient for the famous red fish curry which is unique to central Kerala.


Soak cocum in 3 tbsp water for 10 minutes.Mix the powders (chili,coriander & turmeric) together with coconut oil/water & make a paste. Heat oil in a meenchatti (earthen ware) or a pan & splutter mustard & fenugreek. Add crushed ginger garlic paste & stir for 3,4 minutes. Add small onion & curry leaves & saute till it becomes soft. Add the masala paste & fry till oil starts appearing. Add cocum along with the water & fish pieces. Combine well. Make sure that fish pieces do not get broken in the process, it will be safer to rotate the pan to ensure that fish & masala is mixed well. Add required amount of water & cook till the fish is done & gravy becomes thick, it will take around 20 -25 minutes on low flame. Serve with rice or kappa , dosai or even your good old bread!

Yes... it is that time of the year for rejuvenation or vacation.

We shall soon be boarding the plane and this time we have some plans to travel a bit. Last time we were tied up at home and could not move around much.

Out here the temperature is rising and we are also having frequent sandstorms. The monsoon will be a welcome change after all this. I hear the rains have started in a small way.

I started to value the beauty of the places I grew up more, after I left home for my studies. Was able to visit home only during study leaves and long holidays. By then Father was transferred to Coonoor, another beautiful place on earth. This estate was in the Kotagiri district. If one walks a bit one could see the old roads that led to Ooty. We have made many long treks through this place and almost reached this old road that wound up through the Nilgiri mountains.

I remember how I used to drink in the beauty of the place during my return trip. The drive from our place of stay to Coonoor was long and had tea gardens, a bit of forest and small towns in between. I never took off my eyes from outside since I feared each trip would be my last since Father was nearing retirement. I also used to thank God for giving me such happiness but at the same time I never dreamt I would have to travel far away to a desert. But that is how life is.. very unpredictable indeed.

So if net and time permits, I shall be posting; else please do not abandon my blog, but do wait until I get back.
Posted by Happy Kitten at 8:49 AM 13 comments: