My blog is carbon neutral

Just when I was about to delete yet another random email from my inbox, my curiosity got the better of me. The subject line read “Make your blog carbon neutral - 1 Blog, 1 Tree”.
The email was from a German based company called kaufDA. kaufDA is a leading German site for local search and local promotion search. The company enables users to look for the best local sales online, search brochures of local retailers and find stores near them. They claim that this reduces the printed sales brochures that normally flood the letter box or are distributed in other ways. Now, I am not sure how they are taking care of their carbon footprints. Since their site has an Alexa rating of 13,371 they sure must be generating a lot of footprints. Hope they themselves are planting trees!
They do have an impressive website to explain the whole business of blogs and carbon foot prints.

Anyway I wrote to them to find out if they really intend to plant trees or if it was just another sales gimmick to garner more traffic to their site. I did receive a quick and convincing response. KaufDe has teamed up with Arbor Day Foundation, a nonprofit conservation and education organization based in US. The trees will be planted in Plumas National Forest in Northern California. Arbor Day Foundation’s aim is to reforest Plumas National Forest which was destroyed by recent forest fires. If one is a US citizen and joins Arbor Day Foundation, they give you 10 trees for free! Their website claims that last year members planted 8 million trees.


According to a study by Alexander Wissner-Gross, PhD, physicist at Harvard University and environmental activist, an average website causes about 0.02g (0,0008oz.) of carbon dioxide for each visit. Assuming an average blog gets 15,000 visits a month, it has yearly carbon dioxide emissions of 3,6kg (8lb.). This can mainly be tracked back to the immense energy usage from (mainframe) computers, servers, and their cooling systems 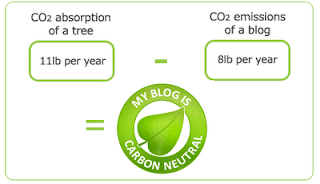 While I am sure I don't create much traffic to my blog to add significant amount to the carbon footprint, I would love to have a tree planted in lieu of my blog!

As they say, reduction of carbon emissions by planting trees has the same effect, regardless of where in the world the trees are planted. It involves all of us to give something back to our environment.

And those of you who do generate a lot of carbon can either plant a tree or join this cause for a carbon free blogging!
Posted by Happy Kitten at 10:56 AM 13 comments:

Headley shall also be "cherished"

One of the major news that we read in the Indian newspapers yesterday was that Headley will be now pleading “guilty” instead of his earlier plea of “not guilty”.

In the American criminal justice system, defendants in federal court can be convicted one of two ways -- by pleading guilty or after a trial.

Those who choose to admit their guilt are often "rewarded" with lesser sentences.

The concept of the plea is one of the major differences between criminal procedure under common law and procedure under the civil law system. Under common law, a plea of guilty by the defendant waives trial of the charged offences and the defendant may be sentenced immediately. This produces a system under American law known as plea bargaining.
A plea bargain is an agreement between a prosecutor and defendant whereby the prosecutor provides incentive for the defendant to plead guilty in order to avoid going to trial. Plea bargains can benefit defendants by guaranteeing particular outcomes. The two most common types of plea bargains are charge and sentence bargaining, where the first type reduces the charge(s), and the latter, the sentence(s). Fact bargaining is a less common type of plea bargain.

As we know now, Headley used this same plea to escape from his earlier offense of smuggling heroine into the US soil. He was not only “awarded” but he got a perfect opportunity to tie up with the elements in Pakistan.

Mr Headley came to the attention of the US security services in 1997 when he was arrested for heroin smuggling in New York. He earned a reduced sentence by working for the US Drug Enforcement Agency (DEA) by infiltrating Pakistan-linked narcotics gangs.

In fact, there are people who wonder if he was working as a double agent for US. If not, one wonders why Headley has not been given access to Indian authorities even after the Pune blast. During Headley’s “high profile visits” (he rubbed shoulders with the high and mighty of Bollywood) which happened even after the Mumbai blasts, he did visit Pune too. Recently Cochin was at high alert since the “Karachi Project” is still being manned by those who continue to run scot free.

Also his being proven guilty and convicted in the US courts makes him inaccessible to Indian investigative agencies.

I guess now Headley shall escape capital punishment and will now be “rewarded” with a lighter sentence.

But will his admitting to certain offense aid in getting Kazab punished or shall we have one more deadly criminal to “cherish”.

This rot needs to go……

As we all know, corruption is the bane of any society or country and enough and more has been written about it. I am only adding a little more after reading the 2009 Global Corruption Barometer report, published by Transparency International.

As expected, worldwide and in India, the most corrupt in a country seems to be the political party, while it is a relief to know that the least is the media followed by the judiciary (in India Judiciary is the least corrupt).

The 2009 Global Corruption Barometer asked more than 73,000 individuals around the world the extent to which they perceive six key sectors and institutions to be corrupt. Political parties were perceived to be corrupt by 68 per cent of respondents, followed closely by the civil service (public officials/ civil servants) and parliament: 63 and 60 per cent respectively.

When asked which of the six sectors/institutions they considered to be the single most corrupt, the general public most frequently identified political parties and the civil service, with 29 and 26 per cent respectively. At the lower end were the media and the judiciary with 6 and 9 per cent of respondents respectively seeing them as the single most corrupt institution.

The following are the figures for India. 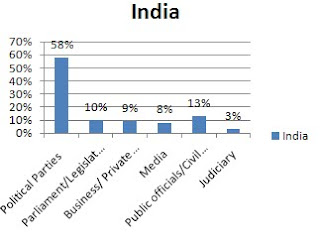 Now if we thought that the educated are less corrupt then the following poll at Transparency International – India indicates the opposite.

Are literate person more dishonest than illiterate ones?

I guess as one gains knowledge/education, one also learns how to lead a corrupt life! It also means that as educated citizens of a country, we continue to aid corruption.

Transparency International India has managed to seal Integrity Pacts with a few organization starting from year 2006, although more needs to follow. 39 PSU’s in India has so far signed the pact. The list can be viewed here.

The Global Corruption Barometer report also points out the following:

Finally, reporting on bribery takes place at worryingly low levels – with only about a quarter of citizens taking any action against corruption.

And in India, we have painfully noted that reporting can be fatal and the latest being Social activist Satish Shetty from Pune, while earlier the country lost Satyendra Dubey and Shanmugam Manjumnath for the very same reasons.

Satyendra Kumar Dubey (1973 - 27 November 2003) was a project director at the National Highways Authority of India (NHAI). He was murdered in Gaya, Bihar after fighting corruption in the Golden Quadrilateral highway construction project.

The following was written by Dubey..

"A dream project of unparalleled importance to the Nation but in reality a great loot of public money because of very poor implementation at every state." wrote Dubey.

Finally, he ends: "I have written all these in my individual capacity. However, I will keep on addressing these issues in my official capacity in the limited domain within the powers delegated to me," the letter said.. and sadly he was silenced before he could continue.

Shanmugam Manjunath ( Kannada: ಷಣ್ಮುಗಂ ಮಂಜುನಾಥ) (1978 Kolar-2005) was a marketing manager for the Indian Oil Corporation (IOC) who was murdered for sealing a corrupt petrol station in UP.

Though a few have been arrested for the murder of Satish, the real hands behind these murders run scot free due to the very same reason for which they died. Due to immense pressure, Manjunath’s murderers were brought to justice more quickly than that of Dubey and Indian Oil Corporation paid Rs. 26 lakhs compensation to the family. The matter of adulteration in diesel was taken up by the Energy Coordination Committee chaired by Prime Minister Manmohan Singh.

And now laws are being formed to protect whistleblowers.

Senior advocate D Madon, appointed as amicus curie to assist the court, said that countries such as Mexico and Columbia have special systems for providing protection to activists, and authorities are studying them.

But then it is sad to note that, Satish did report to the police that there was threat to his life but no protection was provided.

We also saw the Zero Rupee Note by the 5th Pillar Organization used against corruption. This is gaining ground and I hope these and more initiatives will fight this disease. 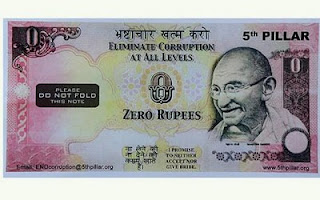 The following is one outcome of the Zero Rupee Note:

Benefited out of the Old age Pension Scheme

Kathavarayan, a 72 year old person residing in Then Alambakkam village in Villupuram District, had applied for Indhira Gandhi Old Age Pension that is granted for poor people below poverty line. Mr. Kathavarayan waited for many months after applying for this pension to the Dindivanam Tahsildar office, and when he was replied by a clerk at the Tahsildar office that the scheme is closed, he sent a pleading letter to the Chief Minister's office on 25th June 2008, begging for special consideration and grant him the pension as he has no means to survive. He sent another letter to the CM's office on 9th March 2009 as he did not yet receive the pension. Mr.Kathavarayan, received one of our Zero Rupee Note during our campaign in Villupuram and so he contacted our office and we filed an RTI petition on his behalf, attaching all his previous communications to the CM's office and his application. We did not receive a reply for the RTI petition, but the old man received his pension.

and it is true.... when we exploit power for personal gain, the disease called corruption spreads and the whole system rots.
Posted by Happy Kitten at 2:12 PM 12 comments: