This time we made another trip to Gavi. It was a decision made at the spur of the moment between cousins. Too much planning can sometimes kill the plan itself.  In year 2013 we went to Gavi from Vandiperiyar and hence missed the road through the thick forest. We were told that this road from Pathanamthitta, via Seethathode needs either the KSRTC (Kerala State Road Transport Corporation) bus or a vehicle with a high ground clearance. None wanted their vehicles tested and hence we decided on KSRTC. Besides, only a certain number of vehicles are given passes each day and one need to obtain this in advance. We were three families and decided to move from Thiruvalla at least by 5 AM to reach Pathanamthitta in time to catch the bus that leaves at by 6:30. Getting families out of the house in time is no small task but we did manage to reach Pathanamthitta to see the bus about to leave. While the men went to find a parking space for the cars, we ran to catch seats. To our dismay we found that the bus was almost full with only a few seats empty. Initially one thought they were all heading to Gavi, but later realized that this was an ordinary bus that would be stopping enroute to Gavi. 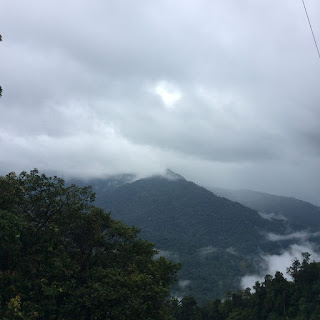 The children had to stand for a while and a certain family selfishly occupied a seat which otherwise could have been shared. The bus left in time and the ride early in the morning was too good. Fresh air, light drizzling and low traffic set the right mood for the trip. The bus halted for 15 minutes at Angamuzhi for breakfast. The choice was Kerala Paratha and curry or Appam and egg. The bathroom was also clean for such a small town hotel. We devoured what was ordered while keeping an eye on the Driver and Conductor, lest they left us behind!


After almost 2 decades of not getting an opportunity, the KSRTC bus made me feel like meeting an old pal! The same old seats and paraphernalia. When it started raining my hands went up automatically to loosen the clasps that held the shutters. And down it came with a crash...the familiar sound felt like music to my ears. Silly me! When you lift it back, it needs to be done in such a way that keeps it balanced, else getting the clasp back in place will need some more tinkering. But for me, it happened like old times J
The ride was too good because of the passing scenery even when the road turned bumpy and when the branches kept knocking the sides and the passengers. These branches were also dropping strange bugs and insects. The road for almost 25 km seems not to have seen no tar since it was first laid! It is almost a four hour trip but I never felt it so. 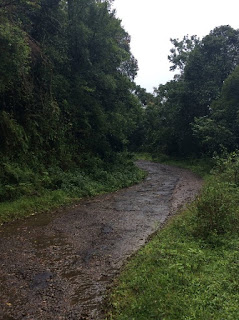 We got down at the main center at Gavi, only to realize that it was open only to those who have pre-booked. 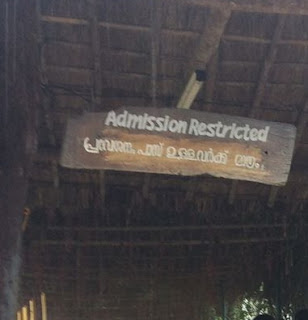 This was done since tourists were harassed for their camera and other stuff. One can pre-book either a day trip or stay over program. Details are provided on the KFDC website.
Luckily we found a jeep which took us to Kochu Pampa where the government has developed a second place for the rest. They have a snack bar and boat rides too. Since it was lunch time and stomachs (plenty of them!) started grumbling, the men folks made use of the jeep to fetch lunch from a canteen a little away. Meanwhile the rest of us went for the boat ride.  If one is not pre-booking, it is better to bring along some food. The canteen is a little far away and there are no other shops close by and you may have to be satisfied with packaged  juice, biscuits etc. from the snack bar. 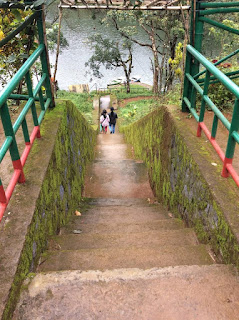 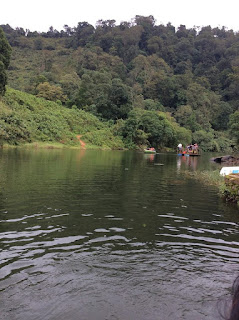 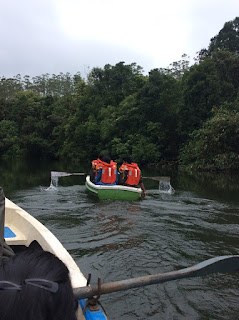 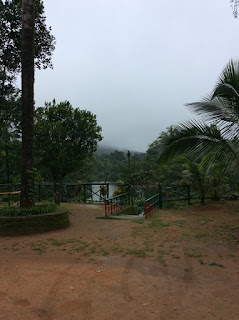 We did see an elephant and wild buffaloes during our trip. We also got to hear about the tragic death of two Gujarati tourists early in 2015. Seems the lady was so engrossed in taking photographs that she failed to heed the warning calls of the rest. When everyone else managed to run away from the Tusker, she continued clicking photos. She was trampled to death instantaneously while the husband who came to her rescue was thrown away and a tree stump went through his neck. This happened very close to the main road.  Wild animals ought to be treated as wild and sometimes one may feel bold, but one can never be sure when they may get irritated.  The following video shows that elephants can be a common sight in Gavi, specially during summer when they move around for water. It is always better to be cautious while enjoying wild life.
The same bus returns from Vandiperiyar around 3 PM. We managed seats this time since it was quite empty. We reached Pathanamthitta around 7 PM.
One needs to appreciate the driver and conductor of this trip who manages such a precarious route and on a daily basis. As for the driver, while driving his eyes also scans the horizon for wild animals and does not hesitate to stop so that one can see them and photograph them.  Luckily we did not see any very close :) 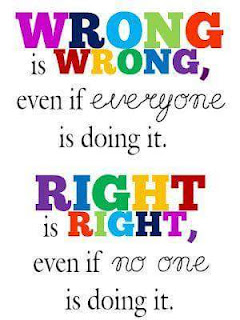 As one grow older one realizes that the word integrity seems to have no value in our times. But what is value? Value must be something that one can measure? And measure in what ways? Obviously money.


Yes.. money seems to be the only commodity that seems to be having a say these days. Many have tossed out integrity for the sake of money. Look at our politicians. How many can one count? Yet, they garner votes.

Integrity is important for politicians because they are chosen, appointed, or elected to serve society. In order to be able to serve, politicians are given power in their positions to make, execute, or control policy. They have the power to influence something or someone. There is, however, a risk that this power will not be used by politicians to serve society. Aristotle said that because rulers have power they will be tempted to use it for personal gain.[9] It is important that politicians withstand this temptation, and that requires integrity


Success Will Come and Go, But Integrity Is Forever says Amy Rees Anderson in her article:

If I could teach only one value to live by, it would be this: Success will come and go, but integrity is forever. Integrity means doing the right thing at all times and in all circumstances, whether or not anyone is watching. It takes having the courage to do the right thing, no matter what the consequences will be. Building a reputation of integrity takes years, but it takes only a second to lose, so never allow yourself to ever do anything that would damage your integrity.


We live in a world where integrity isn’t talked about nearly enough. We live in a world where “the end justifies the means” has become an acceptable school of thought for far too many. Sales people overpromise and under deliver, all in the name of making their quota for the month. Applicants exaggerate in job interviews because they desperately need a job. CEOs overstate their projected earnings because they don’t want the board of directors to replace them.  Entrepreneurs overstate their pro formas because they want the highest valuation possible from an investor. Investors understate a company’s value in order to negotiate a lower valuation in a deal. Customer service representatives cover up a mistake they made because they are afraid the client will leave them. Employees call in “sick” because they don’t have any more paid time off when they actually just need to get their Christmas shopping done. The list could go on and on, and in each case the person committing the act of dishonesty told themselves they had a perfectly valid reason why the end result justified their lack of integrity.


Someone I know has made money the central point of his life that his every relation revolves within it. He made money dubiously and even though everyone is aware of it, none is bothered since money seems to have this wonderful ability to dim the eyes of an onlooker. Money attracts those who love money more than anything else and money whitewashes the wrongs for a while. This person’s love for money is so much that he discarded his parents. The father is no more but the mother who may not be in this world for long wonders how a son whom she doted upon can do thus. And can one beseech the religion he follows? I guess not since those who are leading religious organizations need money and so they close their eyes to such misdeeds.