I did not mean the upcoming Lok Sabha elections in India; for which we NRI’s continue to remain foreigners.. but I am talking about EARTH HOUR 2009.

1,858 cities, towns and municipalities in 81 countries have already committed to VOTE EARTH for Earth Hour 2009, as part of the worlds first global election between Earth and global warming.

Kuwait Tower has already committed to join and they hope that more organizations and individuals will join them. 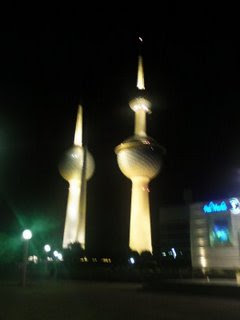 For those in Kuwait, you can join Earth Hour 2009, by turning off your lights at 8.30pm Saturday 28 March and sign-up here at earthhour.org.

As usual there are skeptics for this one too… some says it maybe just to bring glory to certain organizations and individuals eying the “Global” awards. If one remembers, when the oil price shot up, there used to be an email going around asking individuals to stop filling Oil on a particular day to bring down the demand and hence the price. This was ridiculed too, but then we saw the price going down and one cause is definitely owing to lower consumption due to the economic slowdown. Even after output cuts and temporary closure of refineries for imaginary reasons, the price still refuses to move up and ease the pain of all those who were dreaming of a 200 USD per barrel price.

So if possible, choose to stay in dark for at least 1 hour in those places where we do not have power cuts:), burglaries and maybe even electricity!
Posted by Happy Kitten at 11:09 AM 14 comments:

It was the National and Liberation days holidays here in Kuwait and that combined with the weekend gave us 4 days of holidays and I still feel lazy. Thankfully the next weekend has already arrived.

As usual we avoided the roads on the N & L days since there would be an effusion of foamy patriotism. I am sure there are people who enjoy it, but it is just not our cup of tea. This year we read that one person was actually killed! I hope now some laws will be put in place so that at least next year the “weak in hearts” (if we are all still here!) can join the celebrations and maybe even support this economy.

Anyway, we finally got around to seeing the film “Slumdog Millionaire”. Whatever other feelings it may evoke, it will not bore you. It may appear like any other Hindi movies sans the songs which these days assaults one’s senses (the songs in itself are good if one is only listening)

Yes, the editing is wonderful and so is the sound. As for Rahman’s music, it cannot beat the one from “Roja” or many of his other creations but it is good. The film also had the element of romance which I am sure would appeal to all. The undying love that Jamal has for Latika is very touching.

Yes it has the slums , the dirt, the kiilings and the child beggars. And all those who felt insulted must realize that there was no exaggeration. And yes, the slums and these souls are just next to the world’s costliest private residence and its inmates.

I am sure one cannot make every Indian rich but every Indian does deserve clean drinking water, sanitation and a decent place to “answer the calls of nature”. Those who seek their votes must realize that it is their right to have them and those who will soon give their votes should claim these rights. Entire generations of Indians (including myself) have grown up taking these basic amenities for granted and some continue to pretend that it is otherwise.

There may be trillion excuses for these amenities not being present for a multitude of Indians but it is ironical that India can produce millionaires and billionaires across all religions with or without (?) the help of the same government machineries.

Salman Rushdie rubbished this film on the basis that the story line in the book and the movie are unbelievable. I do not know what is unbelievable in the movie. (Yea, he continues to look for his "true love".)

Maybe the director made the mistake of depicting the boys as Muslims while in the novel he had a name which combined all the major religions and we Indians know the fact that the slum encloses human beings from every religion. But the director did capture one essential factor and that is what continues to appeal many. One doesn’t have to be rich to have noble feelings and also to excel in any field. Don’t know how many of you have watched these clippings that shows a boy who seems to have mastered many languages. He is only happy to earn his daily bread and to do the job that was taught by his grandmother.

But with due respect to the director (he seems to be a genuine stuff) and to the producer who trusted him, the cynic in me does wonder if this movie was indeed good enough to have replaced the others which normally enthrall the Oscar lovers. With the world in a financial turmoil and with a possible reduction in the number of potential viewers from the usual corners of the world won’t India’s 1,147,995,904 (2008 est) population with a good percentage of movie lovers compensate the global business houses? Financial turmoil or not, most Indians will continue to keep movies in their priority list. Haven’t we all been nurtured on fantasies and demi-Gods that let us escape from the ground realities?

As for an Indian(Bollywood) director or a producer, I do not think he will ever get away with such a movie. umph! not even one seductive, reveal all dancing scene and not even one "foreign country"!
Posted by Happy Kitten at 9:23 AM 4 comments: