The UPA government’s final attempt to regain the lost trust of the voters before the impending Lok Sabha election is through the much acclaimed National Food Security Bill (NFSB). This is also being lauded by MSN as Sonia’s pet project.

The four pillars of NFSB

Food Availability: The availability of sufficient quantities of food of appropriate quality, supplied through  domestic production or imports (including food aid).

Food Access: Access by individuals to adequate resources (entitlements) for acquiring appropriate foods for a  nutritious diet. Entitlements are defined as the set of all commodity bundles over which a person can establish command given the legal, political, economic and social arrangements of the community in which they live (including traditional rights such as access to common resources).

Utilization or Absorption: Utilization of food through adequate diet, clean water, sanitation and health care to reach a state of nutritional well-being where all physiological needs are met. This brings out the importance of non-food inputs in food security.

Stability: To be food secure, a population, household or individual must have access to adequate food at all times. They should not risk losing access to food as a consequence of sudden shocks (e.g. an economic or climatic crisis) or cyclical events (e.g. seasonal food insecurity). The concept of stability can therefore refer to both the availability and access dimensions of food security.

But after repeated readings of several articles I fail to understand how different it is from the current Public Distribution System (PDS) or others that are already in place.

The FSB also talks about anganwadis. But these have been in place since 1975! We also have the mid-day meal programs in government schools since a long time.

So what is the new bill going to do which the older one couldn’t do?

It is an accepted fact that much leakage happens in the old system. FSB hopes to take care of this by the direct cash transfer system. How foolproof is this going to be when those governing the system have not changed at all?

Today, India has the largest stock of grain in the world besides China, the government spends Rs. 750 billion ($13.6 billion) per year, almost 1 percent of GDP, yet 21% remain undernourished. Under PDS scheme, each family below the poverty line is eligible for 35 kg of rice or wheat every month, while a household above the poverty line is entitled to 15 kg of foodgrain on a monthly basis. 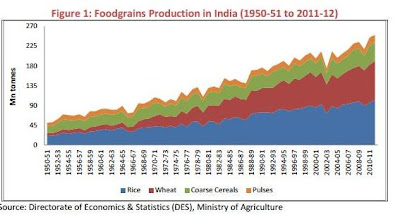 The above graph shows that our foodgrains production has increased every year; yet millions go hungry.

As for storage of foodgrains, our FCI storages have never been revamped.  In fact much food grains are lost while in storage and is shameful in a country which has the most hungry in the world.

Even now most ration shops indulge in practices which create a black market, thus increasing the food grain price.

In aggregate, only about 42% of subsidised grains issued by the central pool reach the target group, according to a Planning Commission study released in March 2008.

Besides, how much free food can a nation afford to give and how long?

Instead if this amount is utilized for free education it will go a long way in creating a nation better equipped to face the present times.

Won’t free and mandatory education combined with mid-day meals take care of a large section of our population? Won't it go a long way if a part of this money is spent on infrastructure projects?

If more than 40 years of upliftment through PDS couldn't make much change to the number of poor in India how will it do so now? Yes..we have uplifted our politicians and that is what even this will do. They shall remain the only winners as usual.