Our faith is so fickle; it requires tickling...

The last 2 weeks we were forced to switch from one channel to the other (Kerala has almost 14 regional channels!) hoping to catch the latest update on the various “kalla” Swamis. The scenes were better than any reality shows with a gun wielding swami shooting rampantly and then even screaming with pain. Of course, one will never know the political connections behind them since both the major parties are involved.

All along, Hubby and I were wondering when more religious “gurus” will be unearthed. It is common knowledge that world over, religion is now the most commercialised and every religious text and its leaders has been sold many times over. And being a Christian myself, I am not aware of the Hindu Swamis but am aware of many Christian spiritual gurus. We have Malayalam channels dedicated exclusively for these “gurus” and each episode of 30 minutes or more can cost IRS 8000 to IRS 35,000 or even more. Besides the daily appearance in these channels, these “gurus” find precious time to visit other countries too. As everyone knows, visiting US would yield dollars and visiting Kuwait yields dinars.

Now today, we have heard the news that we were waiting to hear since some time. A raid is being conducted at the place of the famed “Thanku Pastor” of the “Heavenly Feast Church”. He seems to have no answer to the source of his income. 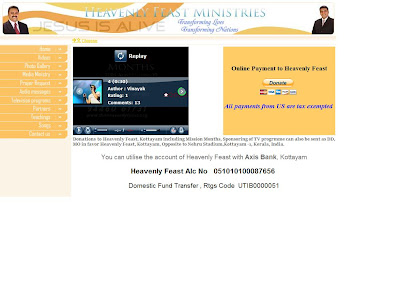 Kuwait was "blessed" to have Thanku Pastor not once but many times. Today while checking his website I came upon an interesting “miracle”. It is under the section “Sow your seeds and pick your gift” where audio and video messages are given away.

By the way, it is not sold like in others and their FAQ section cleverly says so...

Q: “How can I get the resources (media releases) of Heavenly Feast?

A: There are no products from Heavenly Feast. But for those who support us in the missions will be given a ACD,VCD or DVD as per request. LOL!

Now for the miracle!

This is one of the latest releases from Heavenly Feast Media Ministry which features the testimony of our dear Grandma Ammini who died on her way to new york,went to heaven,met Jesus and returned back to life.
Watch this amazing video!

This poor Ammachi must be now wishing she had never boarded that plane to New York, if she ever did!

And while in Kuwait, I was told that people witnessed much healing and miracles. (one poor supporter did die on stage and the healer could do nothing since he had to board the plane to the next destination - Singapore)

I asked one of my friends, a staunch supporter of Thanku to give me the phone number of these witnesses so that I can have a chat. Alas.. no phone numbers! I was also told that he raised many to life in his home town Kottayam! Are the Kottayam residents sleeping? I mean, isn’t it time they demolished those hospitals and gave that beautiful town some breathing space? And at the rate these miracle healing and healing minsters are multiplying, we should soon have the profession of doctors scrapped away.

To think that there are educated people from all Christian denominations and other religions who flock to such gatherings!

I am in no way saying that miracles do not happen. It can happen depending upon ones faith and we already have it in the Bible. “If one has faith as small as a mustard seed, one can ask the mountain to move away and it will”. If each one of us had even a miniscule of this faith in us, we wouldn’t be flocking to these so called healers and preachers. We would have prayed for it to happen and then watched the result. And that is what keeps these “Fake” gurus ticking. Our faith is so fickle that it requires tickling.

And they are not just ticking, they are growing by leaps and bounds. Reliable sources said earlier and now being confirmed that he has built a mansion costing 2 crore in his home town of Kottayam. Like a smart businessman he has also diversified his business. I believe those working closely with him benefits greatly from him while the money keeps pouring from the thousands of believers spread across the globe. Even a penny from the listening believers can add to the coffers. He could also have other source of income which the police should unearth.

He has a shady background which is well known but unfortunately even this has added to his popularity! He used his past to “witness” on his spiritual enlightenment. Ahh.. the tricks of the trade! Who wouldn’t want to sympathise and relate with the lost sheep now come home to the Shepherd. Earlier the text of his “witnessing” was to be seen on his website but now I cannot find it.

Hubby was always greeted with stern faces if he ever mentioned about these so called “Healers” and priests who gathered income beyond their means. The common line being “We have no right to judge others but only God can judge”. Trick no 2.


The coming days are going to be exciting. We will soon see many “gurus” going into hiding. I only hope the public will cooperate and show restraint. I also hope that those who are honestly serving the poor and needy are spared.
Posted by Happy Kitten at 11:32 AM