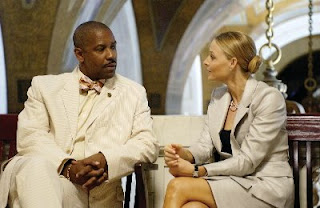 Since we are having Ramadhan timings, we have much time in our hands and hence all those movies that were waiting to be watched are now being enjoyed.

Inside Man is about a Bank Heist Thriller... the main actors being Denzil Washington, Clive Owen and Jodie Foster. I have always liked Denzil.

We enjoyed this movie and it is the first time that I watched an American Action/Thriller movie where none gets killed!

This reminds me of the day I was first introduced to an American Action movie. It was Arnie’s Total Recall. Until then I never had a chance to see such movies since the place where I grew up did not have a theatre showing English Movies. The nearest theater itself was many kilometers away and our Father used to drive us there only once a month, whenever a new movie was released.

It was in the year 1990 that this picture was released and I was in Trivandrum. It was in Sreekumar theatre and we were a bunch of cousins and friends. As you know Total Recall is a science fiction full of gore and violence. My senses were shocked and jostled around. I just couldn’t take the violence in the movie. It was the first time that I saw a gun being used so freely and dead bodies falling every scene. Somehow I managed to sit through the whole movie. When we came out I from my naivety blurted out how they can show such movies. My cousins who were all veteran American movie goers started laughing. I told them that this could affect the minds and dull the conscience of the movie goers. I guess I did not think about PG rating. But even with PG rating, I still think that some movies go beyond normalcy in showing crime and gore. I am not talking about American movies alone, the same goes for others too. Even now I cannot watch violent movies.. I still close my eyes or watch elsewhere!
Posted by Happy Kitten at 10:52 AM

Email ThisBlogThis!Share to TwitterShare to FacebookShare to Pinterest
Labels: Movie