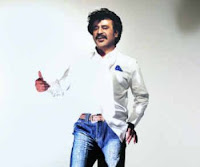 Who is Rajnikanth? An experienced actor and regional celebrity, [2] he received India's third highest civilian honour, the Padmabhushan for his work in Indian cinema in 2000. Although he is not a Tamilian, his fans have taken him to their hearts. People admire and even worship him. They say he is a warm hearted person and treats everyone equally. Since he has humble beginnings, he still relates to the people from the lower strata of society. His latest film Sivaji the Boss has already collected tickets in advance when the movie is yet to be released on 15th June. It seems this movie is being released even in Japan! Now what does the Japanese people who have little time to spare see in Rajnikanth. Beats me! They say there is much laughter in his movie. I guess the Japanese in their busy life forgets to laugh. Well, they have seen much in their lives with the nuclear bombings so one cannot blame them. Even in the neighbouring state Kerala they expect a good collection. And Rajnikanth takes more remuneration than the Iconic figure Amitabh Bachan.

It is finally released.. we tried to get tickets but all the theatres are fully booked!
Posted by Happy Kitten at 9:05 AM