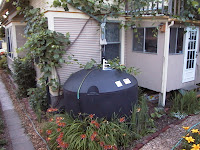 Today we had a discussion on water. The most precious natural resource that we have on earth and whose value is increasing day by day due to its ever increasing scarcity. That is when I recalled a conversation that I had with my Colleague who hails from Chennai. Chennai has always faced water problems since no major river flows through it. It depends mostly on the monsoon for water. But with the rain water harvesting technique, implemented by the former Chief Minister – Jayalalitha, he was saying that the ground water level has increased and they do not face water scarcity like before. Each house has implemented the system whereby the rain water during the monsoon season is collected and stored. Rainwater harvesting is the collection and storage of rain from roofs or from a surface catchment for future use. The water is generally stored in rainwater tanks or directed into mechanisms which recharge groundwater. This is appropriate in many parts of the world, such as western Britain, China, Brazil, Thailand, Sri Lanka, Germany, Australia and India.

I also read that this technique was made use even 4,000 years ago! It was in Lothal, the ancient town of Harappa in Gujarat. Lothal is called the “mount of dead” since it is a very dry region. But it was a thriving port in yesteryears. It is proved that they had fascinating terraquaculture system — integrated land and water use practices. Click for further read.

I believe it is time each country pursued water conservation more seriously before we end up fighting major wars for water. State like mine which is blessed by abundant rain should invest in rain water harvesting systems and maybe this should be either made compulsory or the state should offer subsidy.